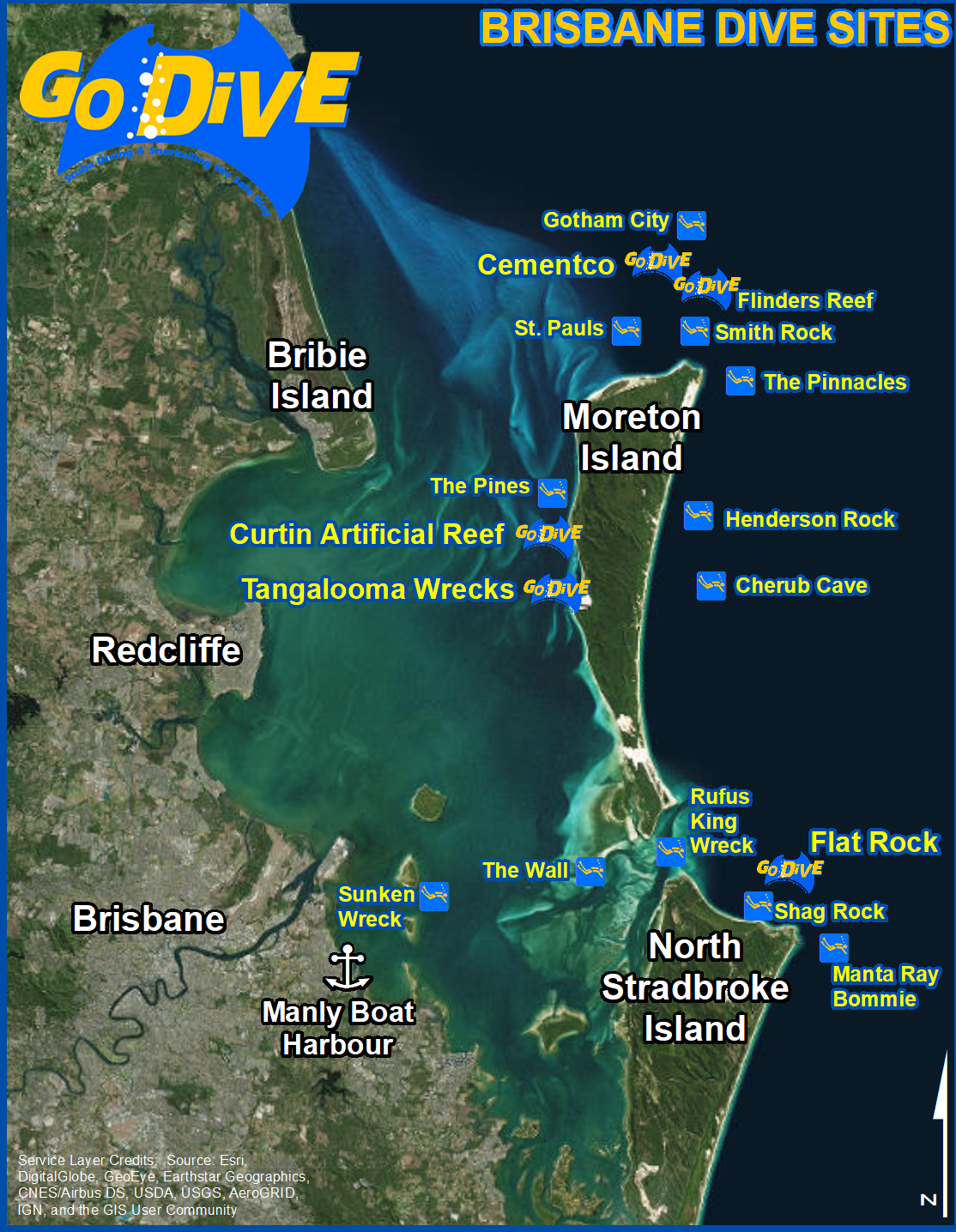 1. Curtin Artificial Reef is comprised of more than 20 ships deliberately scuttled by the Underwater Research Group of Queensland. The first was sunk in 1967 and even today more are still being added. Curtin is famous for the family of giant groper that inhabit these waters, some of which can weigh up to 500 kg. If you're lucky enough, you can see 4 or 5 in one school so keep an eye out.

2. Tangalooma Wrecks. These wrecks are filled with a great abundance of marine life from giant Trevally to Crayfish. The dive is best completed in a drift so that in a 40-minute dive you see all the wrecks along the wall. Tangalooma offers every diving environment in 1 dive, including reef, wreck, drift and naturalist, all in about 12 metres of water.

3. Cementco. A large upturned wreck, seemingly unremarkable until divers look inside. It is home to massive rays and groupers as well as crayfish. Wreck penetration or just swimming outside observing the wide range of fish and coral life are equally rewarding.

4. Flinders Reef has an amazing diversity of fish and marine creatures including more than 175 species of fish, many species of Turtles and in the winter months, the migrating Whales. Flinders reef also has many pinnacles, swim throughs, ledges and even a sunken trawler.

5. Flat Rock is one of Brisbane's most popular scuba diving sites, mainly because of the natural rocky environment and the diverse range of coral and fish that you are likely to encounter. You can see anything from tiny clown fish to the docile giants of the sea, the grey nurse sharks.

6. Shag Rock is a great dive site for macrolife and has the benifit of a swim through which can be quite spectalular. Max depth is about 18m with visabilty ranging from 5m to 20m.

7. Manta Bommie During the summer months we are graced with Manta Rays and the aptly named dive site provides great oportunities to witness these large gracefull creatures, this site also offers many macro and larger creatures such as Leopard Sharks, Shovel Nose Sharks and many differnent varieties of Sting and Bull Rays. Max Depth is 16m with visability ranging from a few meters to 20m.

8. Boat Rock is an Advanced dive site often prone to high current but is spectacular in the right conditions. Boat Rock is a 30m meter pinnicle with caverns and a plethora of species of fish located all around this pinnicle. Max depth is 30m with visability averaging 15m.

9. St Pauls is a steamer that sank in March 1914 with a full load of ore. Located roughly 1000 meters to the east of Smiths Rock. Depth is between 38 and 43 meters of water on a gentle sand slope due east of Smiths Rock. She sits in an upright position, favoring her port side, with the bow pointing westward to the rock that sent her there. The superstructure and most of the hull plates have now rusted away, leaving the wreckage of a once fine ship collapsed on the sea floor. From a divers perspective this is a very challenging dive, from encrusted deck winches and lift raft anchors to nuggets of chromium ore, the careful observer is well rewarded. The wreck has abundant with marine life. Large estuary cod can be found lurking in the shadows.

10. Smiths Rock is an advanced dive site located between Cape Moreton and Flinders Reef. Max Depth is about 21 metres, visibility on an average day is about 15m, Swell and strong currents that are common, so advanced divers can find it really challenging. So slack tide dives are advised. Comprising of granite pinnacles that come up from the ocean floor until they taper off approximately 6 metres below the surface. Below the water, the site is full of swim-throughs and little caverns. Massive schools of fish – especially crayfish. There is a lot of ship debris on the sea floor and it is possible to find Bulldozers at this site.

11. Gotham City is located 8.5 km North of Cape Moreton and 1 km North of Flinders Reef. Gotham City is one big block facing East West and is 50 m long by 25 m wide. It comes up along a steep wall out of the sandy base at 37 m, the top of the wall is at around 26 m and the top of the rock is 22 m deep. The wall facing the East is overgrown with black corals. On the Western site of the rock just before the western edge there is at 28 m a small cavern. In the cavern there is a memorial plague of a favourite dive buddy. The rock is overgrown with barnacles, turf algae and some soft coral. Tropical fish can be seen swimming around the edges. Large schooling sweetlips are hanging in the lee of the rock hiding for the current.To the South West of the main rock system there is an granite ridge in deeper water which worth while exploring. The site is known as a deep site and its beauty best viewed with clear water. Although the site is a small site the dive depth limits it from long exploratory dives.

12. Hendersons Reef is located 4.5 km from the ocean side of North Moreton Island and consists of extensive granite outcrops. From the top of the pinnacle, which lies in about 12 m, the rock drops gradually at first but then more steeply to about 24 m. Before the 24m mark there are several ledges, overhangs, and caves whose entrances are often obscured by thick kelp. To the south and east of the base of the pinnacle there is a long deep gutter that leads roughly south to about 22m and it is here that grey nurse sharks are often encountered. The areas is characterised with Kelp beds on the western site and bare rock on the top going in to 2 m high walls with swimthrough hidden in them. There are also large cavernss further out in water around 25m deep

13. Cherubs Cave is located a short distance from Hendersons Rock, along the same underwater ridge parallel to the Eastern side of Moreton Island. Not often visited due to he distance from land, however on the right day it is truly spectacular, with a pinnacle rising to 15m from depths around 30m. A cave inside the pinnacle is around 15m square, with another cave (inaccessible) around the same size. This is a site for the more experienced diver, as currents can be found here, but this often brings great visibility for the unusual topography of gullies, cracks and crevices, and the short kelp that spots the area.  Large schools of fish, turtles, loads of critters in amongst the cracks, and in the winter months, an aggregation point for Grey Nurse Sharks.

14. China Wall is located at the eastern side of Moreton island and with its depth to 30 m. The outstanding feature is a tall vertical granite outcrop with a 2 m wide swim-through at the top. The area is covered with a thick layer of broad leafed kelp providing protection for crayfish and slipper lobsters. There is heaps to see from see sea whips, fans, schooling fish, pelagics (tuna, mackerel and barracuda) and the occasional shark cruising by. 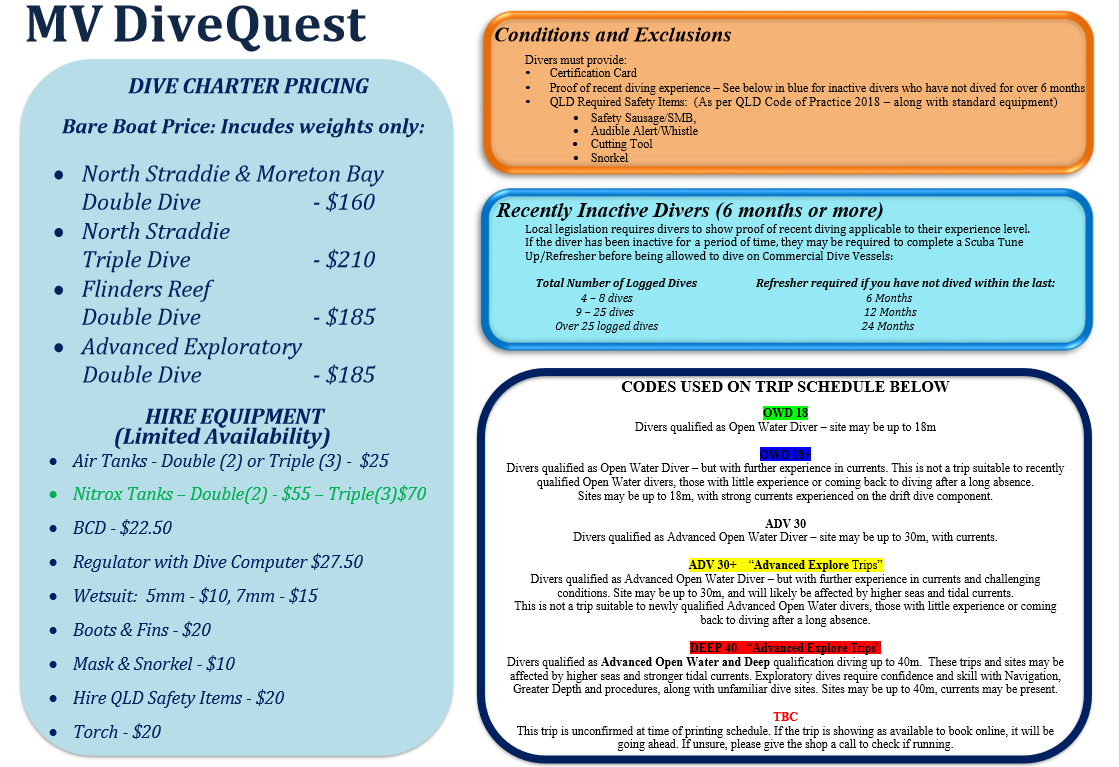 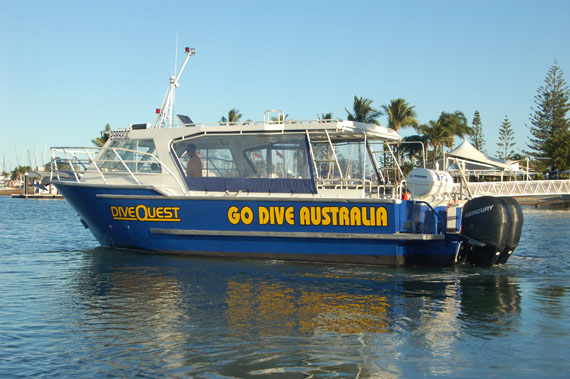